The video previous is DUSK, taken just after 8:30 PM. I shall endeavor to improve on my cinematography techniques in future efforts.

This was posted through Imgur, which I use for still photos. If I can get Vimeo to work here, I would like to put up larger videos than this. Working on it.
P

From the last test, I have withheld Ca(NO3)2 completely in order to reduce both Ca and NO3. These have come down a little. The K and Mg have been adjusted and now are perfect. Once Ca finally drops to about 40 ppm or so, the GH will be 3.0 - 3.5 degrees, and I expect NO3 will then come in well under 10 ppm. This is the goal.

I have also withheld PO4, and it has dropped. Now I will go on with the regular dosing and let this value rise again. Iron is more than fine at .5 ppm, but it is descending. I am increasing the dose just slightly for both gluconate and trace to arrest this descent.

Major maintenance and pruning and such always generate debris and generally stir things up. When doing an aquascaping alteration this disturbance is inevitably part of the operation. This has been as much a housekeeping chore as an adventure in artistic arrangement. Since I began this project, I have had to change out the intakes weekly. A good deal of detritus was no doubt a result of pulling up all that Sagittaria, but a lot of old leaf litter was also raked out. I suspect I eliminated a source of considerable DOC, to which I attribute, in part, a favorable increase in redox and clarity.
P

Sparging will increase O2 but also blows off CO2. Continuous or frequent vigorous aeration is not good practice for planted aquaria. It wastes the CO2 that is being deliberately forced into or conserved in the water column, while it is not difficult to hold onto acceptable O2 levels without much effort, especially in densely planted tanks. Without more data points it will be difficult to quantify more exactly just how much CO2 usage goes to loss from this process. I am perfectly willing to accept that it is significant, as the CO2 concentration is accomplished by attention to good practice, and, in the case of HLHT, no small expense.

Similarly, more data will be needed to translate an 18% energy input reduction into quantifiable CO2 conservation. This should be a real effect and a measurable quantity in a properly devised experiment.
P 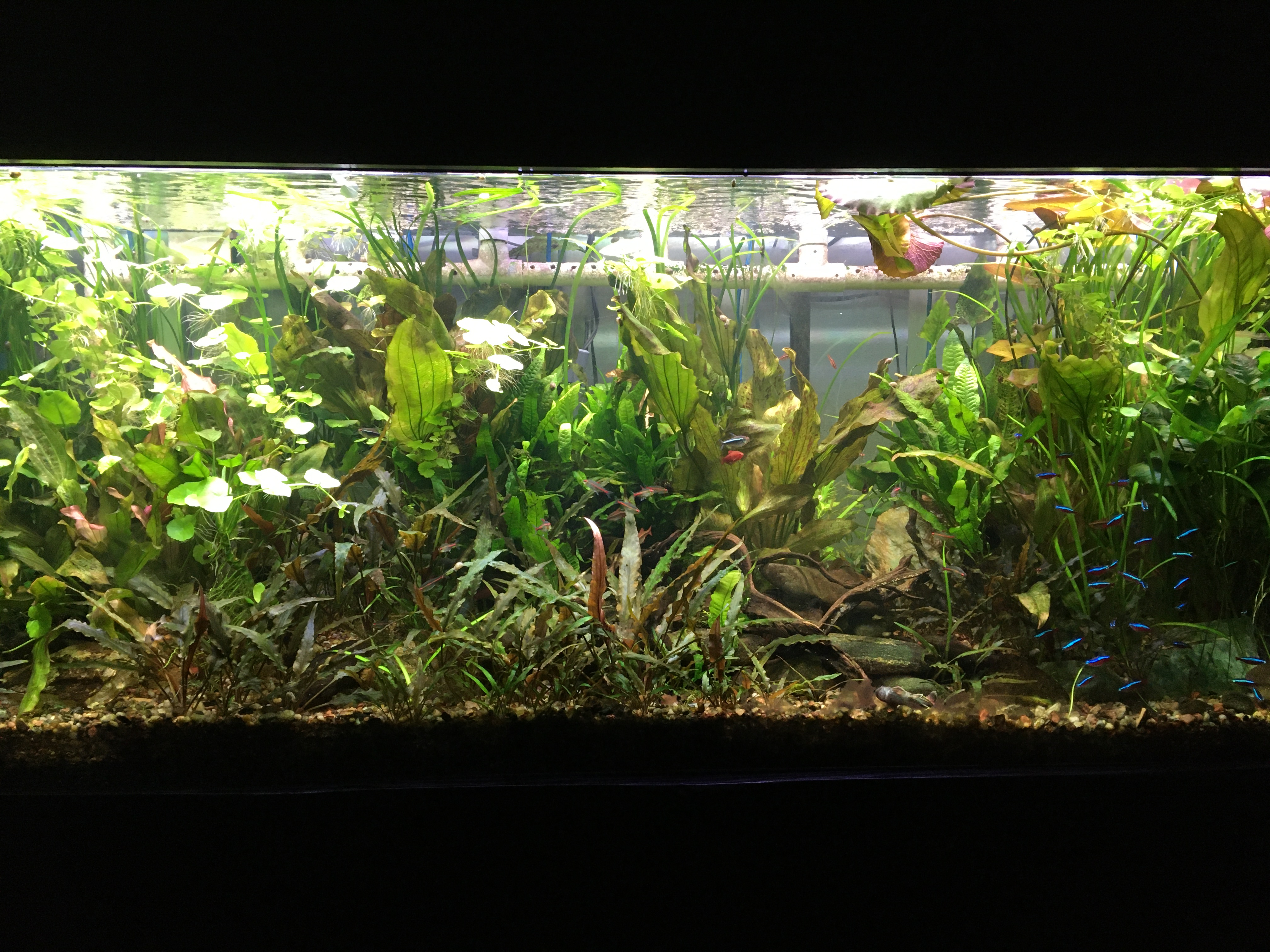 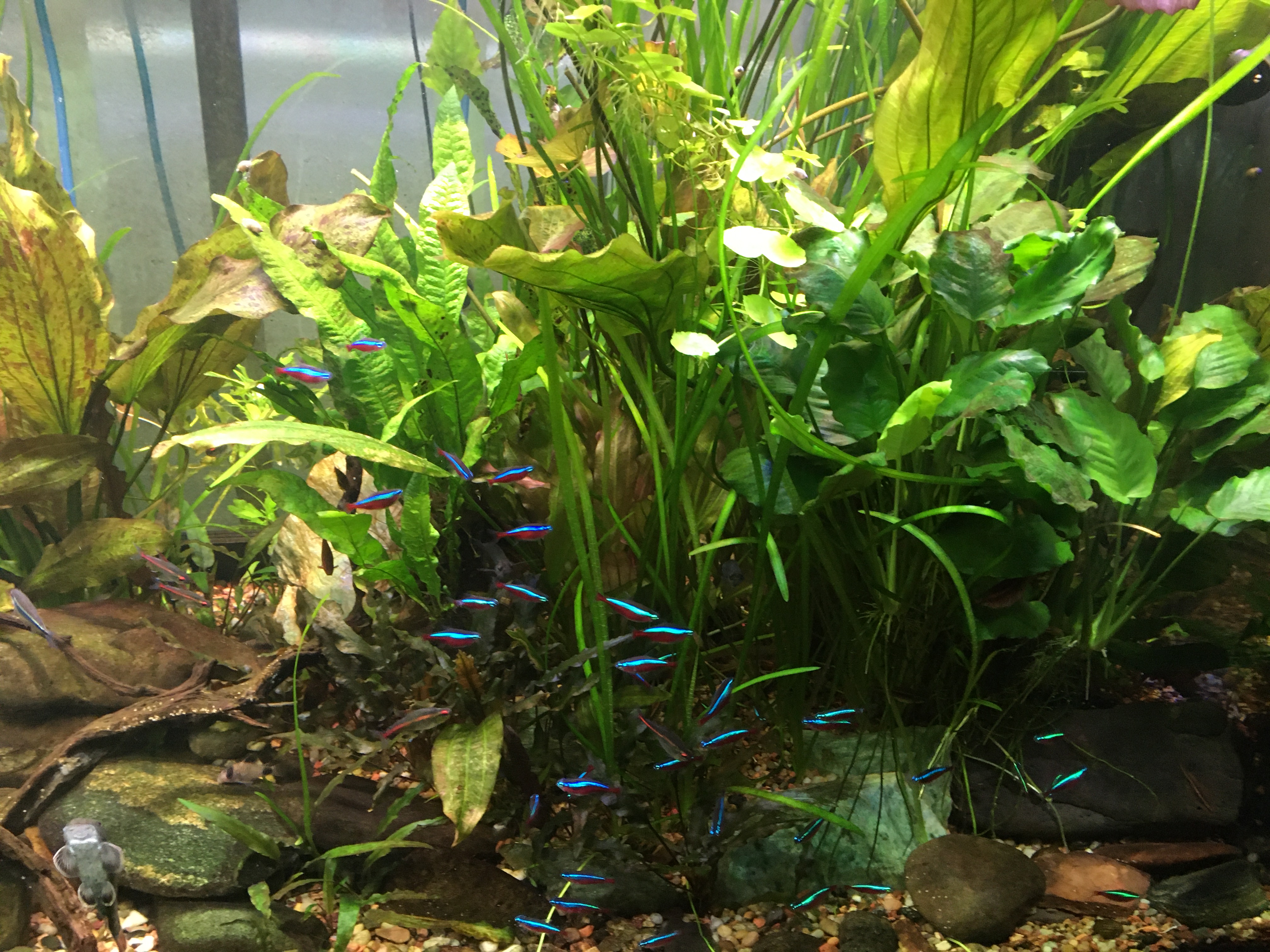 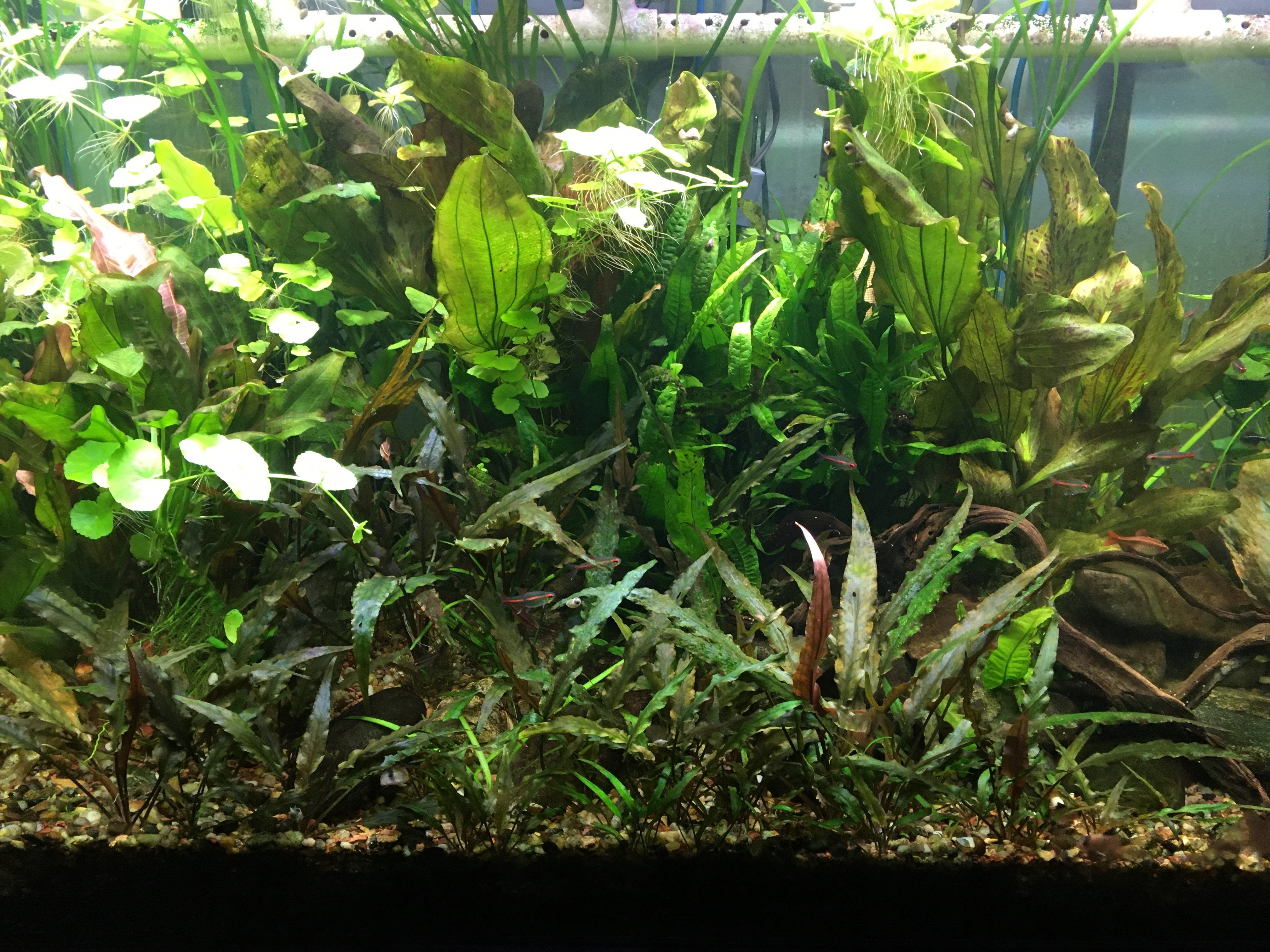 I am pleased that the Sagittaria is filling in again. It fits the 'scape well, but it must be kept under control. Another plant that I have been keeping for a long time is Hydrocotyle leucocephala (Brazilian pennywort). You can almost watch it grow and it will quickly become a tangled floating mess. But it really adds to the appearance of the tank if it is trimmed routinely and kept in its place. Although they could not be more different, these two weeds work together - slender, tall tape grass curtains and button-bearing vines. They are perfect for large jungles, impossible to kill, and are a good nursery for prolific barbs.

The Hygrophila difformis (water wisteria) remnant is showing some growth now, a sure sign it is "taking", and I am anxious to see it pick up speed. I shoved a small fert tablet into the substrate there to help it on its way. Still too small to see it in the pics. This is another plant that I chose because it is easy and hardy, and I think it's a pretty plant. I used to keep quite a bit of Ceratopterus thalictroides (watersprite), planted in the substrate, whose appearance I really liked. It, too, grows weed-like, and when large, the leaf mass mushrooms at the top. Being a fern it must be controlled by removing fronds at the base, and it became a challenge keeping it looking good. Eventually, the big old plants had to be replaced altogether with smaller off-spring. These were never in short supply of course, but I eventually concluded that keeping watersprite this way was going to be an endless chore requiring continual disturbance of the substrate. It does put out roots in substrate, but, long term, it really works better as a floater. I switched to water wisteria which tolerates being pruned in the conventional sense. The aquascaping objective is to have the tall background consist of a little more Hygro and a little less Sag. 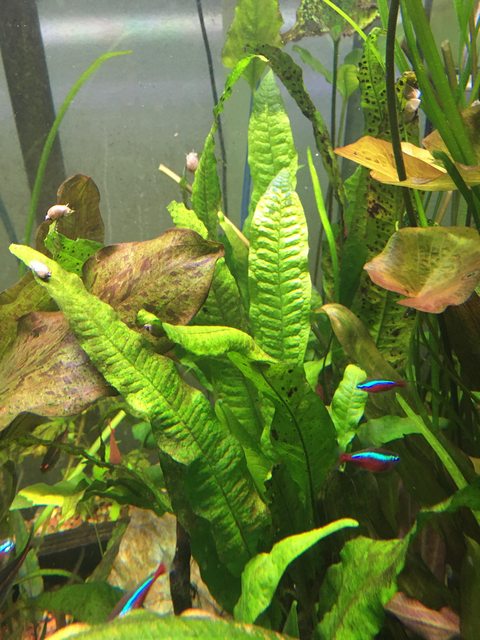 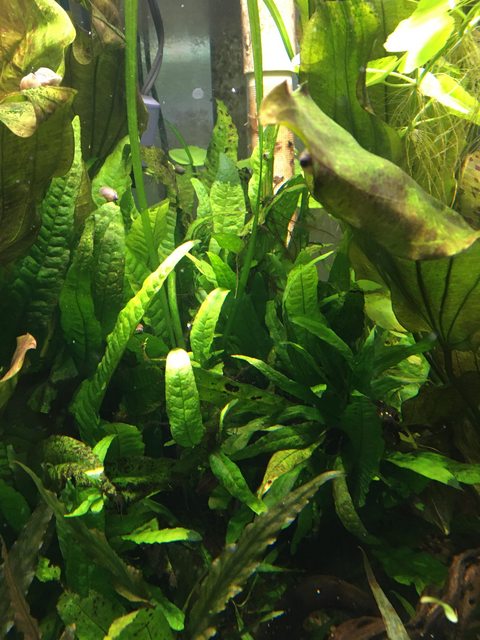 The Microsorum pteropus (Java fern) is looking just like I was hoping it would. It will take a long time, but I want to see a lot of this plant. There is something about the color and shape of the leaves of the common form that appeals to me. I take it as a challenge to grow large, robust, perfect Java fern with no trace of algae.

The established Cryptocoryne wendtii are gradually getting larger and there are a lot of volunteers springing up. I have been slowly pruning the Anubiases, mostly taking old leaves having algae build-up. All these plants are types that actually prefer, or at least tolerate, mid-level intensity lighting. This permits throttling the input energy, the principle objective being to curtail the least opportunity for algae. Slower production overall is a plus so long as what is produced is healthy. I have no issue aesthetically with the reduced brightness. There is plenty of light. Interestingly, the canopy fans and the chiller run-times are down a bit; always good to reduce the heat generation whenever possible. The swords would probably appreciate a higher brightness, but the system is hitting oxygen saturation daily (see graph below). So, I expect that the swords will be healthy long-term, and if their growth is slowed a bit, so much the better. I will be careful not to allow shade to encroach on them, being especially cautious about crowding them with Sag. 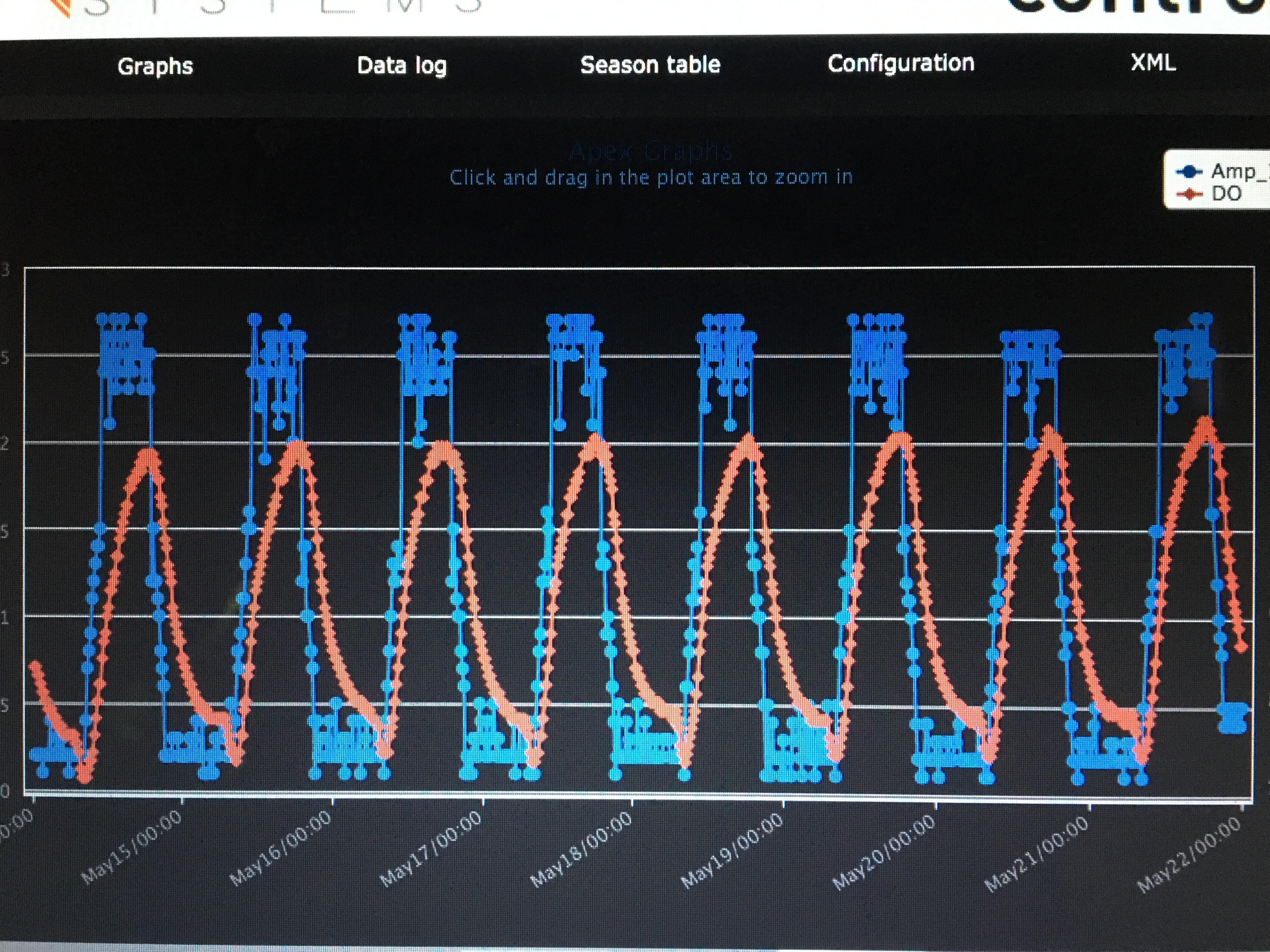